“The ache for home lives in all of us. The safe place where we can go as we are and not be questioned.” —Maya Angelou

Growing up in the small town of Grand Saline, TX, I always felt different, especially since I could never get accustomed to the country culture. As a kid, I did not like usual activities like hunting and fishing. Driving big trucks and riding four wheelers were not on the list of hobbies I enjoyed. Actually, I remember being ready for bigger cities when it was close to my high school graduation. I had been preparing for college for most of my life, and I was ready to take on the next chapter of my life. But I never imagined having a longing for home, a feeling of safety in the streets of my adolescence, the freedom from responsibilities, the captivating moments of football on Friday nights, that came when leaving for college. One of the most interesting aspects of leaving your hometown, besides being on your own for the first time in your life, is the way that your perception of “home” changes, especially for me in rural East Texas. With each passing year away from home, I felt more connected to my hometown space, even though I felt “different” being raised there.

But all of that changed, recently.

On June 23, 2014, Rev. Charles Moore self-immolated in my hometown of Grand Saline, TX to protest racism. That truth is undeniable and affected me personally and emotionally, and arguably altered my life. I remember hearing racist stories as a kid in Grand Saline and often brushed them off. I had a strong personality, and even when people called me “Beaner” or “Wetback” I could go along with the joke and not feel uncomfortable in my own skin. When a coach made a racist remark toward an opposing team’s black player, I never thought of his intentions as cruel. When my high school football team chanted, “We’re alright, cuz we’re all white!” in front of other citizens in town, I never thought of the implications of those words. This makes me unique, in some ways, because many other people have to live with those pains on a constant basis, but I was able to play them off, until I really started racism.

I became outspoken on issues of race and racism whenever I first realized that race was rhetorical, that it was a way to position people and communities, a marker of identity, a site of pain, and was, believe it or not, epistemological. When I first read scholarship on race and rhetoric, in 2012 and 2013, I knew I found a niche in my studies, something that uniquely spoke to me in ways that no other rhetorical scholarship ever has. It led to an overwhelming response of memory, taking me back to stories and words stated in my hometown. Ultimately, this drove me to openly and publicly critiquing the culture in which I was raised, not to defame people or label the town of Grand Saline as “racist,” but, rather, to help change the town that I deeply care about.

The town’s problem, to me, is that it has oddly wrapped itself in racist folklore. This folklore ranges from stories describing lynchings that took place at the Poletown Bridge to tales that the KKK once met in the woods at Clark’s Ferry. Some people in town even believe the stories are not just tall-tales but are truths still being played out in Grand Saline today. These stories were told to me soon when I moved into town, and after completing interviews with over 50 people in Grand Saline and around the area, I can state firmly that these are stories that mostly everyone knows. Actually, I have not met a single Grand Saline resident who could not name at least one racist folklore about the town. 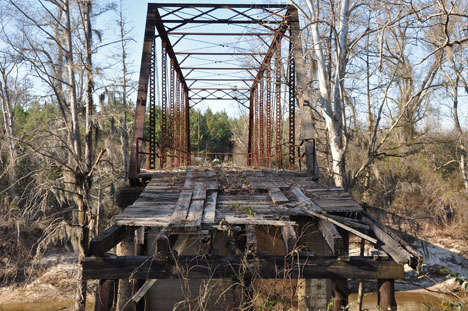 That fact is what makes Grand Saline exceptional: not that the town has some actual recorded history of racial violence (the history is pretty similar to most other rural towns across the South) but that they have a history of this folklore, much of which seems untrue. Yet, and this is a major point, this folklore is what some in town and many in surrounding towns believe is true. It is what makes the perception of racism in Grand Saline one of the most well-known stories in all of East Texas. Some have even declared the story of racism in Grand Saline parallels that of Vidor (a town riddled with racist events). A lawyer discussing a discriminatory lawsuit against Grand Saline in the 1980s even stated that the KKK doesn’t have to be out in the open there because the KKK’s values are engrained in the town’s culture. Unfortunately, the town’s circulation of the stories keeps the folklore intact and marks the town as racist to outsiders. While some of these stories are told by people outside of town, the fact students who have just graduated from high school there can recite this folklore is telling (I have interviewed a few of them).

This past weekend I went to town to work on my film project regarding Charles Moore and Grand Saline. I received the most hate I have had to date from town members (I will not mention all of this here). Some claim I want to defame the town; others say my film is about #BlackLivesMatter (a group I support and will defend but which has nothing to do with the film), but the outcry was real, and sudden, and…hurt me. Since my views on race and racism changed drastically in grad school, I have had many debates with friends on social media. But at the end of the day, I still felt like these people love me and understand me (most still do). However, as I went to bed on Friday night after hearing from multiple people what the town thinks about am me (some comments I had received from some people I know, some from others I don’t), I could not help but think I no longer had that “home” that Maya Angelou describes in the epigraph above. I no longer feel safe in Grand Saline (not that someone would actually harm me) because I get those stares, those stares that suggest I am not the same as the people. I am an outsider. I am different. I do not represent them.

As much as I have wanted to help Grand Saline, my relationship to it has changed drastically. Though I remember all the fond moments of my adolescence and cherish them, they are tainted by my present situation.

I hope when this film comes out and I publish my monograph that maybe some people will open up to the work I have done over the last few years. I know some people will for sure, but I also know that there are many who peg me as a “race-baiter” and will not take to anything I do in a positive light. I have become okay with that, now. But really I just want people to know that I only have the best intentions, whether they agree with them or not. This might fall on deaf ears, but it needed to be said.

Grand Saline, you may not be my safe home anymore, but I promise not to abandon you when the tides get choppy.

When Charles Moore killed himself on that fateful day, he died believing someone would tell his story. He died wanting to make change (though we might disagree with his perception of truth, he still understood part of the culture of Grand Saline). I have told people ever since that if I ever had one story to tell in my life, it was this. I feel cosmically connected to Moore and his act. And I can only hope that the story he began can be completed with me.

4 thoughts on “On Losing a Home (Grand Saline, TX)”