Well, the wifi at our hotel is crummy, so I will be writing this post (and probably the next) from my phone. That probably means these will both be shorter because I really don’t want to write frommy phone.

Today was a long and tiring journey. We woke up and ate breakfast at the hotel and left for our first stop. Jackson is an interesting city. The downtown district and communities near Jackson State University shows how impoverished the city and state are. On one street we drove down today, we literally saw ten total houses that were all abandoned and decaying. These streets once held a vibrant a black community and we’re one of the homes of the modern civil rights struggle. Yet these failing infrastructures reminded me of how quick we are able to forget our roots.

We stopped on the edge of Jackson State University at was once the home of COFO. COFO was the group formed by SNCC, NAACP, SCLC, and CORE, and was pioneered by Bob Moses in Mississippi. Today we met Keith McMillan who is the COFO headquarters curator. He began by telling the history of the movement and the building. Most interesting to me was that the state of Mississippi didn’t even recognize the site with a historical marker until 2011.

Once we finished our quick discussion, we took the short walk to the Jackson Masonic Lodge, which also housed (and still houses) the NAACP during the 1960s. Here we met Frank Figures, a local historian, who filled us in on the history of the building and it’s importance in the movement. We were actually standing in a site where the Mississippi Freedom Democratic Party organized caucuses, where Medgar Evers ran the local movement, and where Freedom Riders had lessons in the early 1960s. Remarkably the bullet holes that had been shot into the NAACP offices in the 1960s, more than five of them, still remained reminders of the town’s tragic history.

Once we left the lodge, we headed back to COFO and talked to two local legends: Flonzie Brown Wright and Hollis Watkins. Both of these people had been a part of the movement in the 1960s and had stayed in the area afterwards to keep up the good fight. Most interstingly both of them were stark contrasts of the nonviolent leaders we imagine: both carried weapons and were not afraid to use them in defense. Wright even stated that she believed the whole nonviolence stance on national level was only pragmatic, most local people actually would resort to violence if push came to shove.

We finished our meeting with these two legends by singing a few liberation hymns, and Watkins led the charge in getting us involved in harmonizing. After a quick lunch in the office, we headed out on a more thorough tour of Jackson. First, we took in the Jackson State Tragedy memorial on campus. The tragedy parallels the Kent State killings, and these two events were only eleven days apart. Here, two black students were murdered (supposedly by police) and eleven were injured on campus. The crime was never solved. Again, the state of Mississippi only put up a plaque to honor these students in 2009 or 2010.

In our last big stop for the day, we visited Medgar Evers house, the location he was shot and killed in the early-1960s, which sparked much of the civil rights movement in Mississippi. The home is now a museum, and we were able to walk through the home and still see the bullet hole from the shot that killed Evers. The visceral effect of being in the place we’re a man died for a cause was unnerving. I felt moved but also helpless. But overall, I couldn’t help but think that Evers life meant something. In dying, he became a martyr, one who has evolved into a legend in local lore. 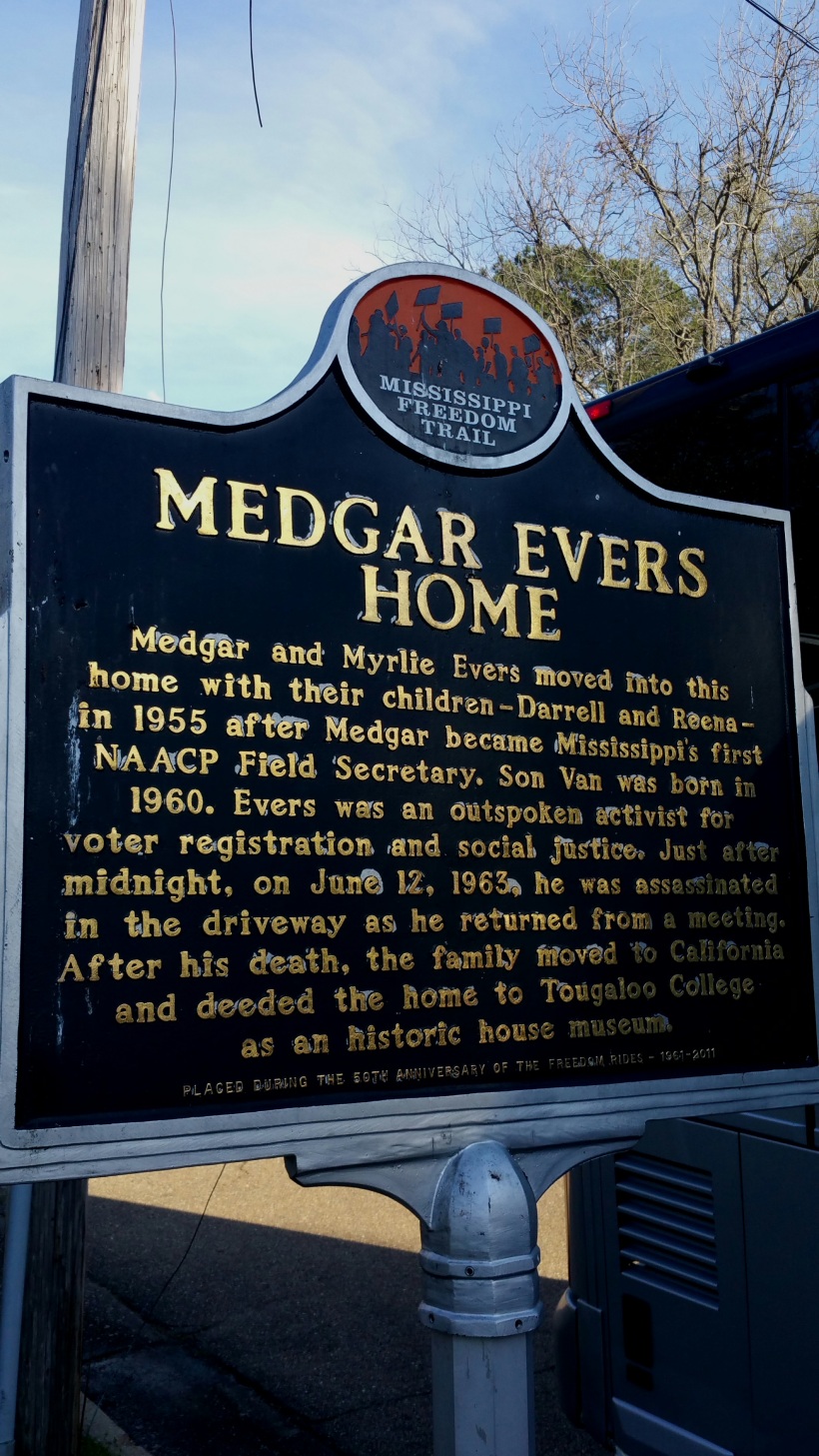 The day ended with a dinner on our way to Indianola. We got to the hotel at 9 and will be travelling through the Delta the next two days.

I will be posting more on our trip in the upcoming days and hope you continue to track our journey together. Thanks!